Appealing Points of Expansion to Europe for Japanese Companies 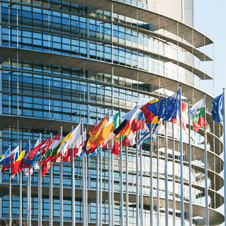 The recent expansion of the EU market is one of the appealing point to consider expansion to Europe. In 2013, Croatia became a member of the European Union adding up to 27 member states in total. The population of the EU region is around 0.5 billion which is more than that of the US, and the GDP of this huge market could add up to 17 trillion dollars. Especially, the central and eastern Europe countries have a relatively high annual growth rate of 4 to 5% and in addition to that, the labor force is also one of the attractive points of EU market, providing low-cost but highly skilled labor force.
This huge market is characterized by the unity of market, which makes it very attractive to obtain a uniform standard for various permits, safety standards and product standards, starting with the removal of tariffs and tariff barriers based on the same laws and systems. This will also greatly benefit Japanese companies in terms of intellectual property protection and logistics. The European market is becoming increasingly attractive as a result of the single currency, which symbolizes unity, and the expansion of the market.
Also the European market is considered as a stepping stone to expand further into the Russian market. It is important for Japanese companies to seek expansion in the European and Russian market, as part of their global marketing strategy.