Thailand temporarily stagnated due to the Asian currency crisis that started in 1997, but has since recovered rapidly, increasing the number of Japanese and Chinese companies entering the country. Thailand is currently maintaining a high economic growth rate and remains a leading industrial country in Southeast Asia. Thailand’s GDP in 2018 was approximately $487.2 billion, making Southeast Asia’s second largest economy after Indonesia. 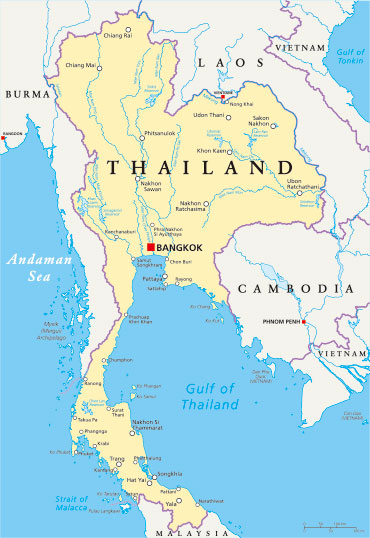 Function as a hub in Asian countries 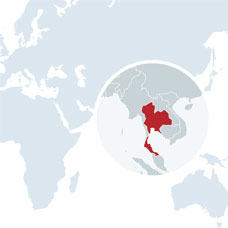 A major advantage of doing business in Thailand is that it can be used as a hub for countries neighboring Asia and for expanding into the world. Thailand is located at the center of Southeast Asian countries, including Malaysia, Cambodia, Laos, and Myanmar. In 2014, the Southern Economic Corridor, which links the southern regions of the Indochina Peninsula in Thailand, Vietnam, and Cambodia was developed. As a result, the logistics environment in Southeast Asia has improved, particularly in Thailand.
From Bangkok airports, not only do we travel within Asia, but we also have many flights to the Middle East, Europe, Africa, and other regions. Therefore, it can play a role of a hub function in the Asian market to support the economic growth of neighboring countries, which are currently growing at between 7% and 10%. Many Japanese companies have expanded into Thailand as export bases to Asia and the rest of the world. 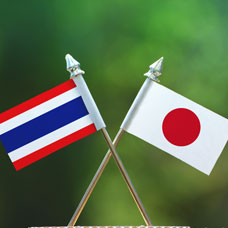 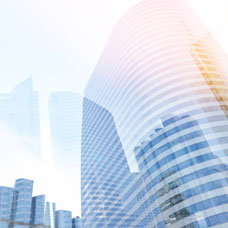 We are able to make inroads into Thailand at low cost. Thailand’s labor costs are said to be about one-fourth of those of Japan. The percentage of students going on to college exceeds 40%, making it possible to develop businesses utilizing cheap and diligent labor. In addition, office rental fees are about one-fourth of those in Japan, which is cheaper than those in other Asian countries. We will develop high-value-added businesses at low operating costs, and it is likely that we will be able to realize a large profit margin even in businesses that are unlikely to generate profits in Japan. In recent years, it has been on an upward trend along with the development of the country as a whole, but it is one of the major advantages of the current situation. 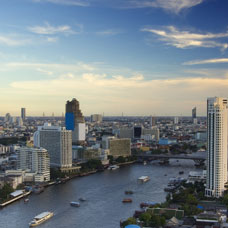 Bangkok is the capital city of Thailand. The population is 8,751,000 (2017), with an area of 1568.737 km². In 2018, the urban population exceeded 16 million, making it one of the world’s largest metropolitan areas. It is also one of the largest cities in Southeast Asia.
Bangkok, Thailand’s largest capital city, is the center of the Thai economy and the center of the economy of the Indochina Peninsula, including Laos, Cambodia and Myanmar. Bangkok is third biggest metropolitan area following Singapore and Jakarta in Southeast Asia.
The Metropolitan area is place for the headquarters of big companies and branches of foreign companies, as well as large-scale department stores and shopping centers. It is a source of consumer trends in Thailand.

The table below shows some examples of Japanese acquisitions of Thai companies over the past four years.

[Regulated/Prohibited]
In accordance with the Alien Business Law (amended in 1999 and enforced in March 2000), we divide regulated industries into three categories, 43 types, and restrict the entry of foreign companies (50% or more of foreign capital) into these industries.

[Investment Ratio]
Enterprises with a foreign investment ratio exceeding 50% are prohibited or restricted from entering 43 types of the aforementioned industries (regulated or prohibited) under the Foreign Enterprise Law. However, there are some exceptions.

[Tax Registration]
Foreign companies are required to apply for tax registration of the Tax ID number with the Revenue Department within 60 days of incorporation or business registration.